READ THE CHAMPION JOCKEY’S THOUGHT’S EXCLUSIVELY EVERY SATURDAY IN THE POST.

“Nunthorpe Power surge shows we’re made for each other."

“I WROTE in this column before Royal Ascot that if ever a horse was made for me it was Sole Power and after yesterday’s Nunthorpe Stakes it’s pretty clear we are made for each other.
“He is a wonderful little horse. It was never going to be as easy to do what we did in the King’s Stand because York is such a different track to Ascot.

“The job was not made any easier when the field split into two at a crucial stage because as soon as it happened I felt I lost the horse beneath me, I had to get him back into the thick of things again, but the moment I did he came back on the bridle.
“Finding a gap from that point was always going to require luck but, as I have said before, I would rather get beat having given a horse every possible chance of winning. Luckily I found room under one of Jamie Spencer’s armpits and now both Sole Power and I have two Nunthorpe wins to our names.
“Sole Power and Tiggy Wiggy looked to be my headline horses for York and thankfully Tiggy Wiggy delivered for me as well.
“As at Newbury none of her rivals saw which way she went. For a small filly she has a huge stride but it is also very fast. Although she goes extremely quickly in the early stages of a race, that is simply her cruising speed.
“Every horse has a natural speed and it just happens that her’s is much faster than most other horses. At York I was never concerned she was doing too much too soon. Her ears were twitching all the way down the straight, so although we were going very fast I knew she was not racing outside her comfort zone.

“I felt through the final furlong she ground out the win having started to drag the finish out of her rivals from half way. She wasn’t stopping at the end of the race but I’m also a realist and I am pretty certain six furlongs is as far as she wants to go. When a horse is as quick as Tiggy Wiggy you cannot expect them to stay a mile. Fortunately, thanks to the new Group 1 sprint for three year olds at Royal Ascot she already has a target for next year. More immediately she will be aimed at the Cheveley Park Stakes and will only then go on to the Abbaye if the ground looks likely to be soft.
“The ground is undoubtedly an influence on her performance level. You won’t see her produce as spectacular a display  as she put up at Newbury until she gets soft ground. The amazing thing about Tiggy Wiggy is she can go as fast on soft ground. She is just a bit freaky. On soft ground she would demolish the opposition, but the faster the ground the more vulnerable she would be.
“There was a dodgy moment when I tried to get on her in the paddock, particularly when she reared up. She is undoubtedly tricky but once she gets that initial fly leap out of her system she is as good as gold. You just have to hope when she does it you are holding on to a bit of mane or you’ll be in trouble. She is the same at home and Maurice Ahern, who bravely rides her every day, deserves a lot of praise. He must be a bit nervous when he goes into work on a Monday morning.
“The opening-day highlight obviously came from Australia. He might be a duel Derby winner but I didn’t think he had earned the right to be described as a great horse going into the Juddmonte International. Now I think we can call him a great horse.
“The Epsom form looked suspect and he did not really do much more than beat a couple of  inferior stable companions at the Curragh. There were question marks hanging over him, but we had been told by Aidan O’Brien just how good Australia is, and perhaps we should have just taken him at his word.
“Aidan has trained the best so he knows what the best look like, but it’s always better to have racecourse evidence to support those positive words. The evidence came in no uncertain terms at York and I was wildly impressed.
“It was a brilliant performance. I tracked Australia on The Grey Gatsby, who himself ran a super race, but there was nothing my horse or anything else in the field could do given the way Australia put the race to bed so quickly.After cruising into the lead he was three lengths clear in no time at all. He possesses the sort of turn of foot that makes him incredibly hard to beat’
“He obviously has to go next for the Irish Champion Stakes on home soil. They can’t really not go to Leopardstown, but after that race I don’t think they need to do anything else with him and I wouldn’t be too surprised if he then went straight off to stud. Anything else he achieves would just be a bonus. With his pedigree combined with his ability, he has certainly done enough for me to send a mare to him. I can’t afford to send a mare to him. But if I could I would.
“I can afford to pay Aidan a compliment and I will by saying his handling of the Yorkshire Oaks winner Tapestry must be one of the finest training performances of the last decade. She was practically pulled up in the 1,000 Guineas and there is very little of her, either, but he has turned her around magnificently.
“I also want to pay York a compliment. I often criticize racecourses over stingy prize-money, but at York this week it has been superb. They cannot accommodate as many people as Royal Ascot but the atmosphere is still fabulous, the champagne is cheaper and the prize-money is excellent.
“The Grey Gadsby’s performance in the French Derby and Dante showed he is a very good horse and he reconfirmed that at York. It was my first experience of riding him but what I took from the experience is what I think he ideally needs is a flat-out gallop’
“America could be perfect for him. They tend to go a good clip over there and all he would really require in the Breeders’ CupTurf is to get a good position and hold it. The same race is on the agenda for Telescope, who just gallops and on Wednesday’s evidence clearly needs a mile and half.
“Also very impressive on Wednesday was Postponed, who’s Great Voltigeur win puts  him right up there with some of the seasons best three-year-olds. The very best three-year-old of all, though, is my old foe Kingman, who was once again absolutely brilliant at Deauville last Sunday.
“I spoke to Rab Havlin, who rides him at home and he told me how much the horse had grown up. He also said he thinks he’s still improving and his judgement has been spot on. Our stable has thrown a few bullets at Kingman since the Guineas and none has hit the target. We just have to accept that he is a brilliant horse and one now I would rather avoid than take on. “

THE NEWS THAT SHOCKED EVERYONE AT YORK LAST WEEK:
Jamie Spencer's Statement that he will be retiring from the saddle at the end of this year.
Richard Hughes one of Jamie's weighing room pals responds:


“LADS in the weighing room were as shocked as anyone to here Jamie Spencer’s announcement he is to retire at the end of the year.


“Jamie is a wonderful jockey. Some people love him, some people hate him, but it is exactly the same when it comes to people’s attitudes towards me.
“Jamie and I are horsemen. I genuinely mean it when I say Jamie gets more horses to run to their best than any other jockey in the weighing room. The easiest thing in the world for a rider is to jump a horse out in the first three and then after it weakens out of contention to come back and tell connections the horse wasn’t good enough.
“Jamie gives his mounts the best possible chance to run well, which statisticians have highlighted by showing his excellent strike-rate in handicaps. Sometimes he flies home on a horse and his critics say he should have won, but if he had put the horse in the race from the start it would not have finished as close anyway.

“There had been a few rumours going around that Jamie had lost his job as retained rider to Qatar Racing. However, the reality is that if Qatar Racing had one or two top horses it would have made Jamie’s job so much easier.
“My own view is this might turn out to have been a hasty decision . The good thing is that Jamie has plenty of time now to the end of the year to have a rethink.
“I for one, would certainly not be closing the book on his career as a top Flat jockey. He might have said he plans to retire at the end of the year, but he definitely doesn’t need to. No one would condemn him if he had a rethink.
“We should not forget – and Jamie in particular should not forget – that he left the best job in the racing world when quitting Ballydoyle , but immediately went on to become the champion jockey of Britain.
“That said a lot about him and he deserves immense credit for rebuilding his career. He has bounced back once before and he can bounce back again.

“Jamie Spencer is too great a talent to be retiring so young. I know there will be many people hoping he realises that and changes his mind. “

J Margaret Clarke Turfcall Factfile
“Jamie say’s himself he wants to be with his children whilst they are growing up. “
Not at some racetrack alone, billion’s of miles from home.
A false global horseracing scene governed by false people, impostors who can’t tell their right hand, from their left, when it comes to the needs and the rights of racehorses and the people who work with them every day. No one, no matter how rich they might, or might not be can be   allowed to dictate like that.
It is through bloodhorse illiterate impostors at government level that this sport has been plunged in to the very depths of depravity, a depravity left ongoing over six decades.

True horsemen treated like shit by bloodhorse illiterate government dictators, dictators who believe they have a right to play games with young ones lives. To burden the young ones lives, to treat the young with contempt. An evil that can never be allowed to exist anywhere on this planet in 2014. An evil that we should from now on work together to remove from any place anywhere in the world that it is found to be active in. 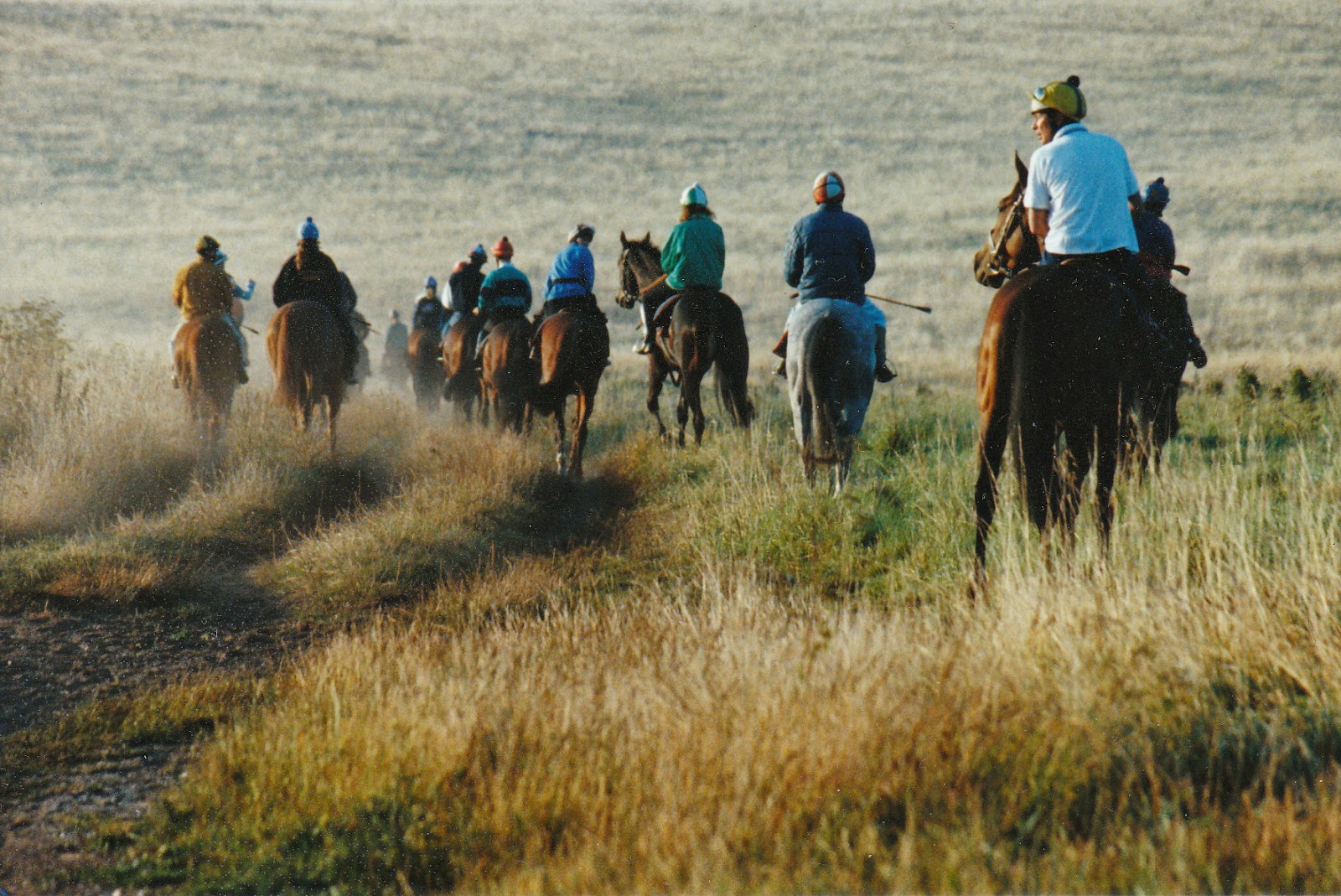